Between abandoned strings warped tapes and esoteric radio broadcasts,  Ayato and Natalia Kamia have found / created a new territory to explore. They are not afraid of silence, they’ve patiently listened to the resonating spaces (inside / outside) and built 8 surprising pieces that will spin around your ears like sparkles from some unknow satellites. Despite of its short length, Cluster is a very rich album, containing enough ideas to fill the full discography of less inspired musicians…You’ll probably want to hear more, so we recommend to check Ayato & Natalia previous collaboration : T, published by H.AK. Lo-Fi Record 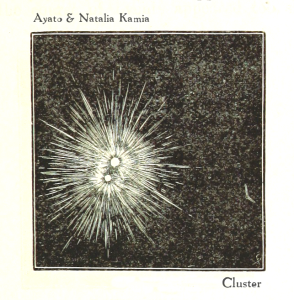 “Cluster, the new release from the duo of Ayato and Natalia Kamia on eg0cide Productions, starts out rather beautifully, but don’t let that fool you. Yes, Cluster is rather appealing, the music that the duo provides is deceptively fascinating. Ayato mixed this release to be the equivalent to walking through an unknown house: each room, an audible incantation; each corner, an engaging glitch;  each hallway, an added noise. Kamia played the piano, the qifteli and other objects, while Ayato played guitars, tapes, field recordings and laptop. If you enjoy this release, make sure you pick up their April 2014 release, T, on the netlabel H.A.K. Lo-Fi Record. T was mixed by Kamia, but it has the same inherent feel as Cluster, or should I say that Cluster has the same feel as T.”