Laura Cavan is a french visual artist who also works with sounds, and especially  natural ones like in her first album Unsuspicious. This project started in 2016 when Laura Cavan was studying arts in Marseille and created an installation using pieces of wood found in the area of her school (which is located close to a forest). The insertion of contact microphones in these pieces of woods allowed to transmit small vibrations emitted by its inhabitants : termites. The resulting sounds were sent in real time through headphones for the installation’s visitors.

Early 2019, some of these sounds have been selected, edited and mixed by Kecap Tuyul in for the realisation of this album. Different, light treatments (mostly equalization) have been applied to the orginal tracks, without trying to hide the recorder’s hiss nor other unwanted sounds, but rather with the aim of letting appear all aspects of the recordings in an organic way. The results don’t pretend to give an accurate reproduction of termite sounds but should rather be considered like sound pieces where the recording technology is a part of the material and not a transparent medium. As a sequel of this release, Kecap Tuyul is currently working on tracks mixing electronic sounds with Laura Cavan’s recordings.

The artwork is made of a selection of Laura Cavan’s drawings of these wood pieces which that were created for her installation. 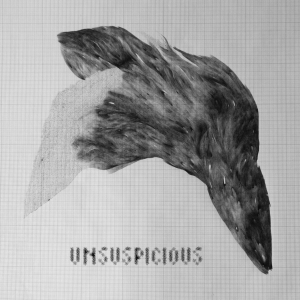 Review by KN, on “Yeah I know it sucks” blog
https://yeahiknowitsucks.wordpress.com/2019/06/19/laura-cavan-unsuspicious/

When I listened to Laura Cavan in a traditionally unsuspicious way, i noticed how cozy it was. From the first moments in her work I felt as if I was in the inner mechanism of a prepared coffee machine, not a cheap one but one of those luxurious ones that had the green light on, ready for a coffee loving person to place a cup underneath and make an automatic cup of sheer deliciousness.

This feeling of being in this cozy coffee machine of sheer luxury that had been equipped with hot warm water inside, the kind of wanted liquid ready to be used to please the great tasting flavours of a coffee lover in an instant simply continued in the second track that Laura Cavan had boiled up. It made me feel very small, but also very safe. I could sit in this coffee maker for ages, dreaming about raindrops on a attics window; it’s one of my favourites calming things to fantasise about…

When the third track came in, it was as if Laura Cavan had read my mind.. I didn’t wanted the release of sound to go anywhere. I wanted to stay inside this coffee machine and listen from this place like a voyeur to the possible human activities that might happen outside of this coffee maker. I could clearly hear someone walking around, it might be muffled but that only added more comfort to the “I’m just a microscopic figure tucked away in a coffee machine” experience.

Laura Cavan really kept on giving what I wanted to hear, kept the bubbling watery sounds as muffled and wet as they could be, while still keeping me as a listener dry and warm. I mean it wasn’t that the artist was boiling us listeners in a hot pot or anything like that; more as if we could sit dry on a bit of luxurious plastic inside as the water kept itself hot and ready to be used to flush itself through the coffee bean purée.

When track five came even the sound of the coffee maker’s inside seemed to have chilled out. In fact I must say that this was definitely the moment in which I thought that it’s quite relaxing to be here in this coffee machine with no reason to be found by an owner or operator of such an device. It feels so safe and pleasant that I can only say that it’s been a real pleasure to have been Unsuspiciously teleported into this strange situation & I’m gladly inviting you over to be in this coffee machine too. We might want to drink some coffee later if you are in need to do things after experiencing it, as it is pretty sleep inducing!