Uni.Sol_ (United Artists For Well Being Of Solar System) is an “all inclusive project exploring the potential of extrasensory communication”. It was started in 2018 by Slavek Kwi (aka Artificial Memory Trace), with the purpose to “explore and implement the idea of freedom, to enhance research for extrasensory communication through art practise (and related media) and to create stimulating sensual, spiritual and aesthetic experience.”
Participants of Uni.Sol events are invited to “engage simultaneously (=in the same moment) across various time-zones in different locations (=around globe) in ABSTRACT inter-play via sound-media and similar”. But sometimes, despite of their good will, some contributors mess with the time zones. Rather than rejecting the resulting recordings and mixes, Slavek Kwi prefer to consider them as “creative misunderstandings”, which he regularily publishes in a special “Time Travel Section” of uni.Sol_. Blurmoon fall in this category : it comprises mixes of out of sync recordings by the three contributors of uni.Sol meeting of the 13 October 2019

Slavek Kwi’s insight on his work here : “TIMESLIDES & SHORTCUTS (BLURMOON) pt1+2 is extra-subjective (re)mix of uni.Sol_fuLLmOOn, almost random encounter in between Stephen Bradley (USA), Kecap Tuyul (France) and Slavek Kwi (Ireland), recorded Monday 13/10/2019 from 11 PM to 1 AM night in time-zone of Ireland exploring extrasensory long-distance connection (telepathy).
Within memories, time merges in mysterious ways. The observer travels through time while selecting memories through distorted lenses of interpretation and personal preferences. Time then shifts accordingly, creating parallel realities. Untrue to one timeline, true to its nature – allowing to unfold another possible chain of events. Time as constant value collapses.
This sound composition is following coincidental stream of events unfolding in between 3 (or more) interpretations, trying to respect each individual vision as much is possible and put those in panoramic display within mix. Expansive nature of subjectivity creates the paradox of absurd but complementary contradictions: blurring of initial idea on one side and simultaneously multiplying the potential of the same idea on opposite side.” 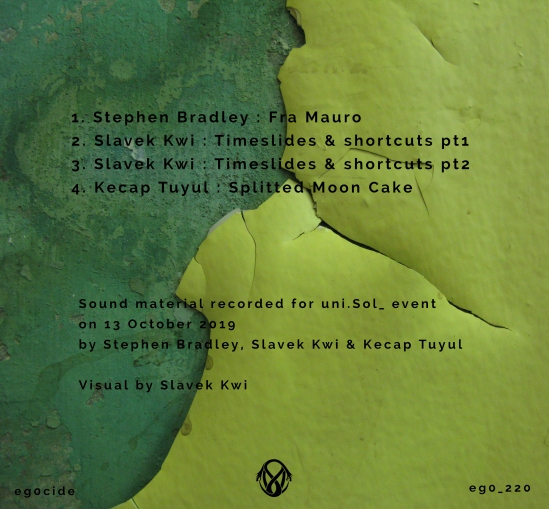